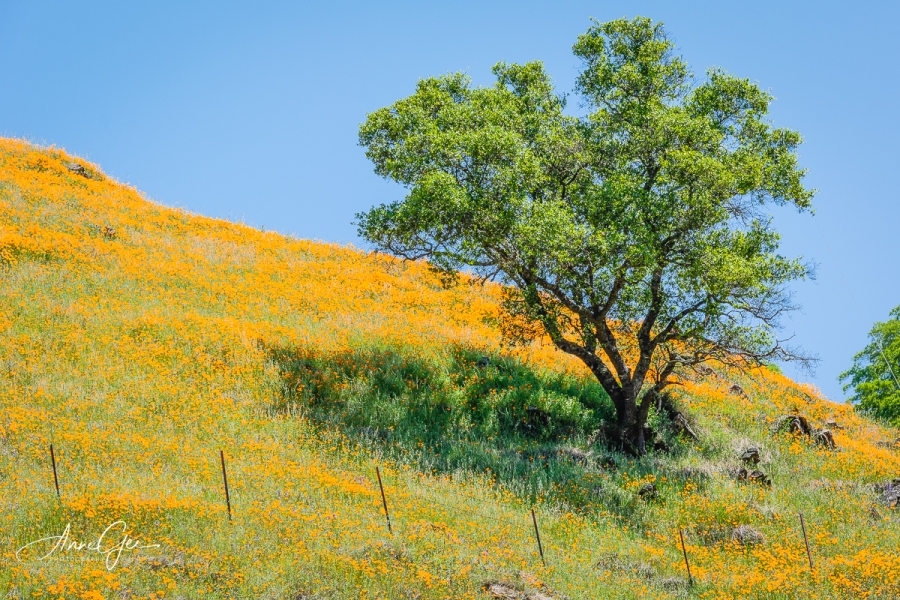 I’m not normally the jealous type, but being in lock-down has us feeling things we usually don’t. Richard was gone star gazing for 3 days and nights, and photographers on various sites were posting pictures of poppy (our State flower) fields, so I became jealous. I needed to get out–safely!

I gave Richard the option of taking Highway 49 (a twisty mountain road) to near Jackson, California with me; but, I was willing to travel on my own. He came with me. About an hour into our drive, we found a mountain full of poppies just south of the town. It was stunning!

I would have liked to explore further, but hunger and awareness of Richard’s nap schedule had us turn around for the trek back home. We ordered sub sandwiches and ate them in the car–again being safe! On the way home we stopped in Drytown, a small town in Amador County so I could photograph a bunch of poppies on the roadside.

We were gone about 2 1/2 hours; not like our previous adventure! It was a great get-a-way outing. And best of all, I’m no longer jealous!

You know you’re addicted when your right index finger wants to press the shutter button and your left hand wants to steady the lens barrel. It was more than a week since our adventurous ride and I needed to get out and take some pictures.

So…. I my camera took me for a short walk around the neighborhood. The long 2-mile walks are reserved for dog walking. First, there are many front yard gardens with beautiful flowers. I made sure I didn’t go on property and just shot what I could from the road’s edge.

We have a lot of wild turkeys here, and the males are telling us it’s the season to show off. These two actually started to move when I lifted my camera, but stood still when I yelled at them not to move!

Last, are our current Canada goose family. These are the only geese to have goslings so far at our small lake. There will be more. And when there are, the dads will guard their families with fierce hissing and may actually run after you if they think you’re coming close to the goslings.

That was yesterday’s walk. My camera is calling me again. I think there’s more neighborhood and more pictures to take! 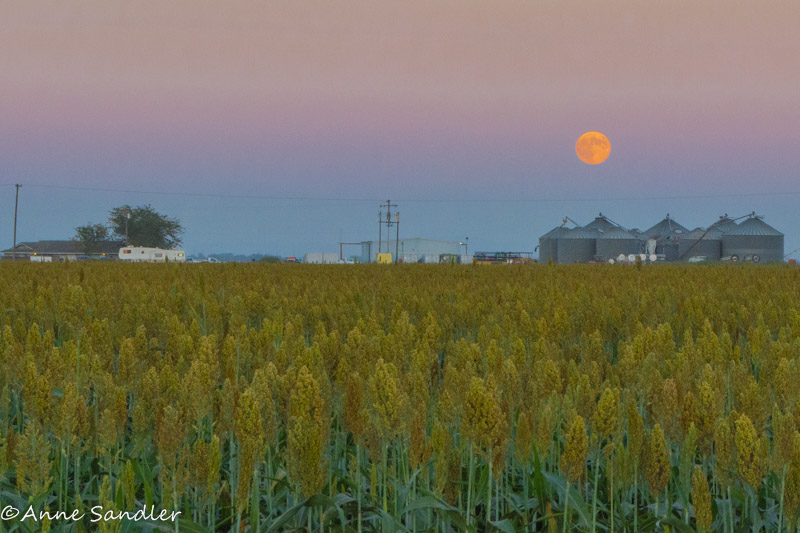 I don’t think it’s the fact that we are under lock-down, I think I can’t get motivated because it’s raining or just damp outside. Yesterday we endured a large, wind blowing and rainy storm complete with lightening and thunder. California needed that storm, but I didn’t need the ceiling tiles in my sun-room ruined and having it rain in the room!

But that didn’t get me down. Neither did my experience with ordering groceries through a local market’s E-Cart service which ended up a disaster. Okay, I’ll tell you about it since you insist. I put my order in online and waited three days to pick it up. On the right day and time, we go to the store and call them to let them know we (Richard and I) were out in the parking lot. They tell me they’ll be right out with my order. Two cars drive up and get their order. I call them again and was told they’d be right out. You can see where this is going! It seems they gave my order to the wrong person. With all the apologies they could muster, they finally brought out my order which wasn’t complete! I’m now waiting for my refund to show up. So we ended up going inside another market to get the rest of the list. We wore our masks and gloves, and practiced social distancing.

Well, I was upset, but that didn’t get me down. Neither did the fact that I had to get a urine sample from my male dog Gem. Have you ever tried that? After several failed attempts with unique ideas, Richard followed the vets advice. He attached the cup to the end of a cane! My neighbor promised to help so off we went on the dog walk of a lifetime. I held the leash and she operated the cane. We were successful. Fortunately, we only had one witness!

I truly believe the weather is my downer. And, I can’t do anything about that, can I! I think I’ll have some fun looking through past photos to post here. After all, this is a photo blog. Maybe it will motivate me to take some images of things around the house for some of the local camera club challenges.

Here are some photos from a night outing in 2014. We were shooting a full moon with silos as a background. This was early on in my photography adventure, and I learned a lot about night photography. 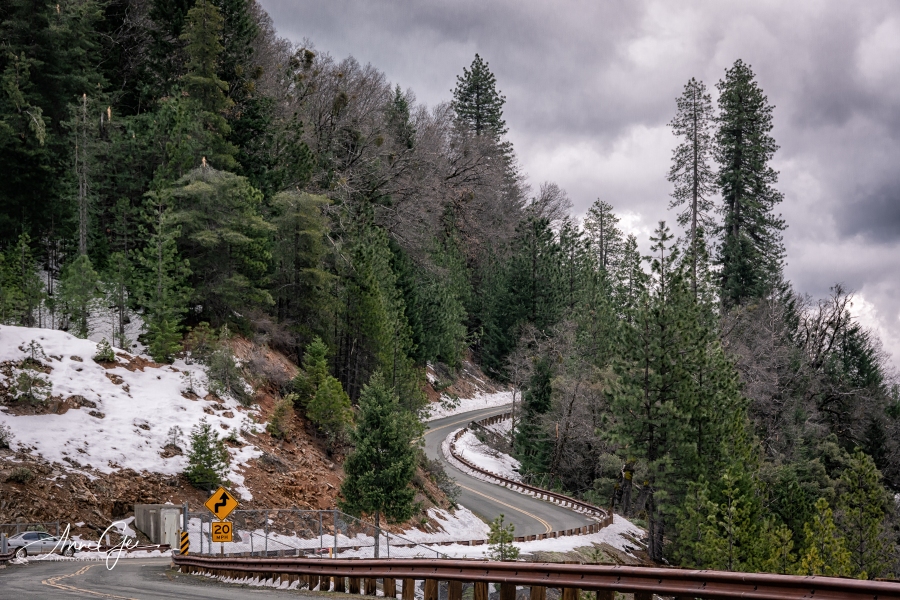 Richard was getting cabin fever so we decided to take a ride up to Sugar Pine Lake in Placer County. Sounds easy and simple! Sure, until you miss your exit off the Interstate and one of you is working on erroneous information. Right now, I’ll admit that one was me! I just didn’t know there was a difference between Sugar Pine Lake and Reservoir. So, I suggested we follow the GPS to the Dam and Reservoir. (Now, as I’m writing this post, I’m learning there isn’t a difference! Now I’m more confused.)

Oh no! Well, trouble didn’t begin that soon. We found ourselves on Iowa Hill Road. Never heard of it! In fact, we never heard of Iowa Hill, but we found it. On our way up the paved, curvy mountain road, we found a neat specimen from long ago. Why it was on the roadside, we don’t know. Maybe just to be an indicator of things to come!

Further up the road, we crossed a river (not sure which one), but were encouraged by the canoes we saw on the bank. We also saw the old Iowa Bridge.

Driving on a narrow twisted road we soon reached the small town of Iowa Hill still not aware of what was ahead.

Once out of the small town, we driving where snow was still on the ground and over another river. We did find the lake and dam.

Now to get home! Again we followed the GPS which took us almost the same way we came.The dirt road began to narrow to one lane and what was probably snow left the road a little muddy!

Now, each time we made a turn, the GPS said stay on the route for 5 or 6 miles. I stopped counting the turns as the road had more and more debris on the sides. I would have gotten out to take a picture, but the road was just wide enough for our car! Richard said, “What will we do if someone was coming from the other direction?”

We both said at the same time, “No one else would be stupid enough to go this way!” Got to have a sense of humor in a situation like this. I estimate that we drove about 15 miles on that road. Close to civilization, we came upon two small waterfalls. There was enough room at each for me to step out of the car and shoot pictures!

As we were churning up mud, I thought if anything happened, nobody would know where we were. We didn’t have cell service and didn’t tell anybody we were going for a ride. Lesson learned. Now, we will definitely tell family where we’re going!

As long as we’re under lock-down, we will be taking rides. After all, it’s the safe thing to do if you don’t miss your turn off!