I hate to work them, but I love to look at and photograph them. The “them” are gardens. And when I do photograph them, I tend to do macro or close up work. It’s been a long time since I’ve been in a formal garden. So, for Amy’s challenge of gardens, I looked back about 3 years and this is what I found.

Maple Rock Gardens is a private residence that is open to the public for special events. Linda and I visited during one of those events.

Each year in June I love taking pictures of sunflowers in and around Woodland. Usually on the way out we, my photo buddies, go to Mezger Zinnia Patch. They ask people to come and pick the flowers for their own use and to give away to others who can’t get out. The zinnias always attract butterflies.

Soon we’ll be looking to photograph the lotus at William Land Park in Sacramento.

And finally are roses from the McKinley Rose Garden in Sacramento.

I now realize I do have to photograph more landscape images of the beautiful gardens near me. While I do enjoy macro work, sometimes I need to look at the big picture!

I think it’s great that three photographers can be looking at the same scene and get three different focal references. That’s because not only do we see and interpret things differently, but there are many pictures within one scene. This week Patti of P.A. Moed challenges us to look into the various ways we can create focal interest in our pictures.

I’ve chosen a few from her many suggestions.

I shot the first image when I first started photography. Out on Angel Island for the first time with my new Nikon D3100 I saw a bicyclist walking her bike under what I call a tree canopy. Taken in May 2013. And, yes, I do love trees. The second image was taken last year in November in Napa Valley.

We have shopping carts from Ikea in West Sacramento, 2019 and Sunflower farm in Woodland, June 2019. Crops can form lines and patterns. I’d need to get a taller ladder to exhibit it better!

Color: Of course I love flowers especially from the McKinley Rose Garden in Sacramento.

Thanks Patti for your very educational and fun blog with wonderful image examples.

Nothing can make you smile like a sunflower! When you see a whole field of yellow and orange looking at you, you just get a great feeling. This year I had the opportunity of visiting Woodland twice and photographed two sunflower fields and Metzger’s Zinnia Patch.

When we visit the sunflower fields, we are careful not to disturb the plants and shoot from around the patch. As photographers, we are happy we’re allowed to take pictures. Cooperation goes a long way!

Bee colonies are kept near the fields to help polinate. I can assure you they are busy bees! Here are some “sunnies.”

We also stopped at a safflower field.

Now for the zinnias. What is special about this patch of zinnias is that the Metzger family allows people to pick the flowers and encourages them to share with others who can’t get out. You’ll see moms and their kids having fun choosing their favorites.

Do you like sunnies as much as I do?

I can’t believe I haven’t posted since July 2nd. Has life been that busy for me? I didn’t think so! Now, with this post, I hope to get back in the posting groove. I may not have been posting, but I’ve been shooting.

And, since this is about the progression of my photographic journey, I’m proud to say that I now close out of most article-type tutorials because I know the information. So this means I need to focus on post processing. I keep saying that, but I truly need to carry through with it. I’m competent with Lightroom, but Photoshop is still a mystery. I’ll have to just make the time and get into it. Maybe that will take my photography to the next level.

But, on to the sunflowers, or sunnies, as we Sacramento photographers call them. The images in this post are from two outings. These sunnies were located near the small town of Yolo in Yolo County. Photo buddy Karen was our guide for both trips. One is in the morning and the other was at sundown. Of course, when I try to catch a sunset, there are no clouds! However, the flowers had that golden light glow. 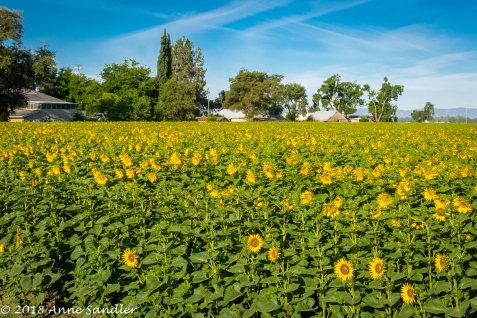 Yes, sunflowers were popping up again. But this time in a different field, in Davis, and different time of day. We, Marlene, Linda and I, found the field about 11 a.m., and the sun was getting high in the sky. A visit to the California Automobile Museum, in Sacramento, caused us to arrive a little later than we would have liked.

My goal was to shoot over the field and get a wide shot. However, we forgot to bring a small ladder. Okay, I’m short! I did my best, trying to stand as tall as possible. It was a different type of shoot than the last during sundown. There was no back lighting, just blaring sun. I’m finding that I now make do with the environment I shoot in, figuring what type of shot would work best.

For instance, at the Automobile Museum, the cars were so close together and the lighting poor so I decided to do mostly close ups. I went for the hood ornaments, the tires, the horns–whatever looked interesting and different. I’m now shooting with intent and not just doing snapshots. I’m actually able to pull out something good from what doesn’t look like a great photo opportunity.

I’m still learning, but I’m more confident in my abilities. There’s another sunflower shoot on July 5. Maybe I’ll join them, you never know what will pop up!

What do the Milky Way, sunflowers and refrigerators have in common? Nothing really, except I experienced them all in one week.

Let’s start with the fridge. I bought a new fridge on June 9, it was delivered on June 11. By the time the installers were done, they had scratched one of the doors, and the ice maker didn’t turn off after 24 hours. Okay, they wanted to send out another fridge on Sunday. But I was supposed to spend the night up at Blue Canyon Airport with my husband Richard (our observatory is there) and a couple of my photo clubs were coming up to shoot the Milky Way. So I changed my plans and arranged to come home with another photographer.

While the Milky Way wasn’t spectacular, I did learn a great deal. This was the first time I was able to shoot it and not get a light tan background when processing in Lightroom. My fellow photographers were more than willing to help. And, they enjoyed mingling with the astronomers.

Back to the fridge which wasn’t delivered on Sunday because the order never made it to delivery. So the second fridge was to come on Monday, June 15. It did, but by the time the installers left, it had a dented door and again–the ice maker didn’t work. Richard discovered that the water had not been hooked up properly! The third fridge was scheduled to be delivered on Wednesday, June 17.

Meanwhile, Tuesday evening, Marlene and I went in search of sunflowers. By the time we found a field in Woodland, going to Davis first, the sun was low in the sky. Most of the sunflowers were in the process of turning around toward the sun and drooping. This was the first time I actually felt in total control. I decided to do close ups and take advantage of the back-lit flowers. I’m focusing on manual for about half my shooting time now. You’ll see the result. The old car was an added bonus. I shot HDR handheld.

Okay the fridge again, It was delivered on Wednesday and I warned the guys that they were to take care not to scratch or dent the doors. They were told to also install it properly and hook up the water. They thought I was a controlling nut case until I told them that this was the third unit.

No scratches or dents, but when my husband checked, the water was not hooked up! Richard hooked up the water while I thought I was living in a script of the Twilight Zone! This morning, my 72nd birthday, I went downstairs and saw about 10 ice cubes in the freezer bucket. I started singing the birthday song. This was a great present!

So was my week of the Milky Way, sunflowers and refrigerators!