Eureka! I can finally handhold my camera and F/4 300mm lens. This is great because putting it on a monopod was difficult to carry around the zoo, which I love to visit. I was using the monopod because the weight from the sling was too much for my shoulder. So the grandma came up with an idea. I would carry my camera like I would a baby and keep most of the weight off my shoulder!

It worked. At a recent visit to the Sacramento Zoo, I was able to support the camera and lens without hurting my shoulder. I was also able to focus and keep the camera/lens steady. The only problem is the difficulty shooting a giraffe with the 300mm! So, I brought along my tiny point and shoot camera.

I’m finally free of the monopod. Here are some of my captured results.

The male Snow Leopard was out. 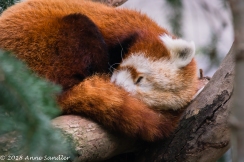 The Red Ppandas were napping.

The male Lion was cleaning up after eating his bone. 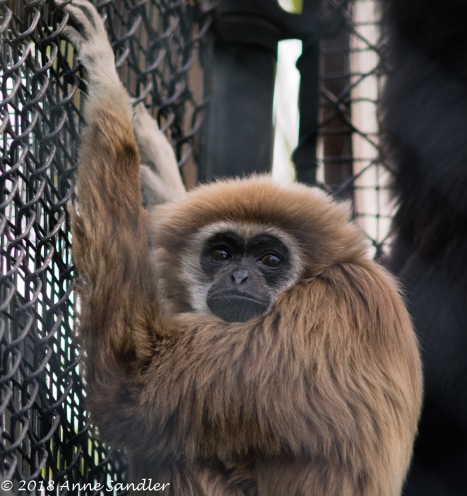 The Orangutans enjoy playing with blankets. 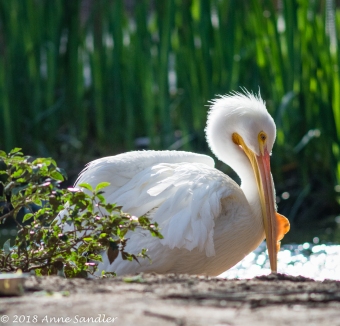 One of my favorites, a Pelican. 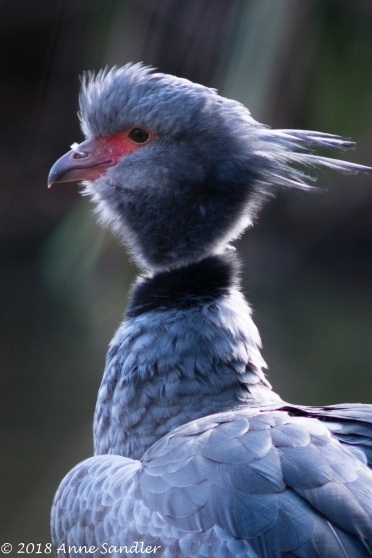 The Eastern Bongo was coming towards us.

A close up of a wood duck.

They come out each day, and are growing up.

They are loved by the children.

The young red river hogs are growing up too.

Hooray, the computer is working! Thank you Kevin!! This technical age has made us so dependent on our computers, phones, tablets. I could say that I remember when, but I won’t bore you. I’ll just say that my typewriter never crashed. It may have needed a ribbon change, or a key might stick–but never crashed.

I do love one digital necessity (at least to me) that has not crashed–my DSLR. I’m still learning, and with each outing I get better. Let’s finish up my trip with Laura to the Sacramento National Wildlife Refuge (SWR) and Gray Lodge Wildlife Area. Laura is the best bird spotter. Without her I wouldn’t see the small birds.

After seeing three bald eagles and many hawks at SWR, we ventured to Gray Lodge. Tired from climbing up and down to and from Laura’s sun roof, I resolved to just shoot what I could get from the open window. Fortunately, there are more opportunities for landscapes at Gray Lodge. Again, there were many hawks, but the sun was going down and it was difficult to shoot them as they hid in the trees. Take a look! 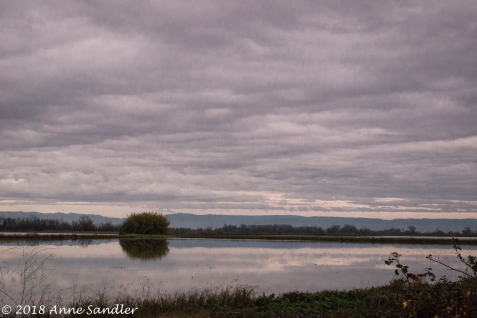 Dark skies and low light, but still some color. 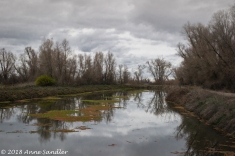 Something ruffled his feathers!

Ducks in a row 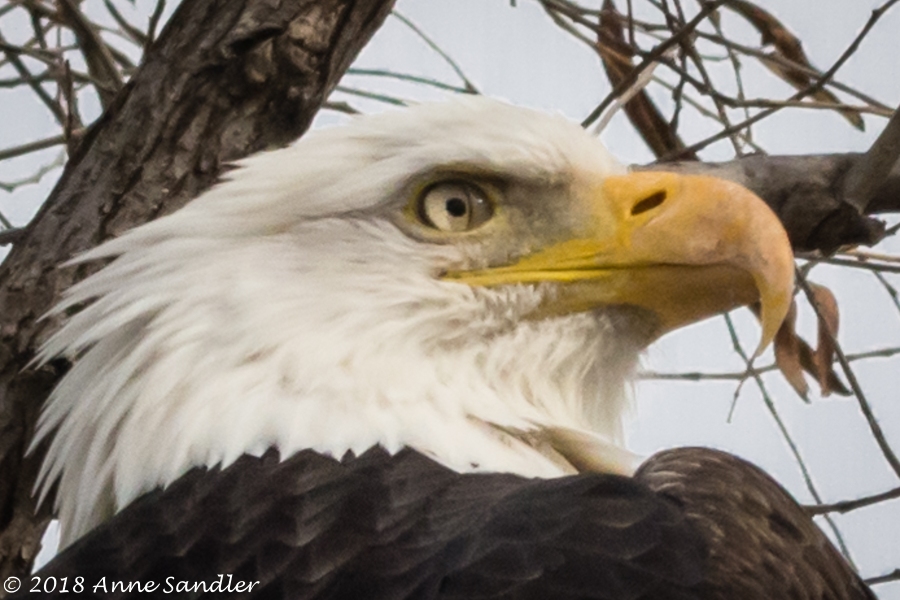 A crashed computer is not the way to begin the new year. Neither is having to cancel two Toastmaster Club meetings because of illness! The computer crashed last week after a Microsoft Windows update, slowing down my ability to post this blog. Fortunately, a friend came over and fixed it.

The computer wasn’t the only thing sick. I belong to two Toastmaster Clubs and we had to cancel a meeting in each because of illness! So, I’m wondering just where 2018 is taking us. We’re also below normal rain fall. But, it’s supposed to rain this weekend and next.

We need the rain and more water brings more waterfowl to the wildlife areas. Laura and I went up to the Sacramento National Wildlife Refuge (SWR) and Gray Lodge Wildlife Area recently and spotted three bald eagles, lots of hawks and other birds. We had a great day. In this post I’ll show you most of SWR and continue in my next post with the remainder and some of Gray Lodge.

It’s only midway through January, so thinks could get better. The computer could continue working and it may rain a lot through January and February.

Landscape shot from the car. I loved the soft colors. 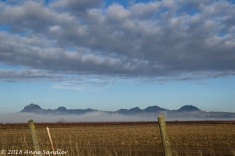 From the car: The clouds were threatening.

From the car: Orchards still look beautiful without blossoms. 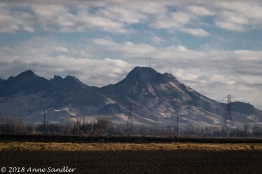 From the car: a view of the Sutter Buttes.

Now at SWR, a turtle looking for sun to bathe in. 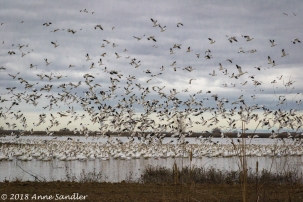 A snow gees fly away. 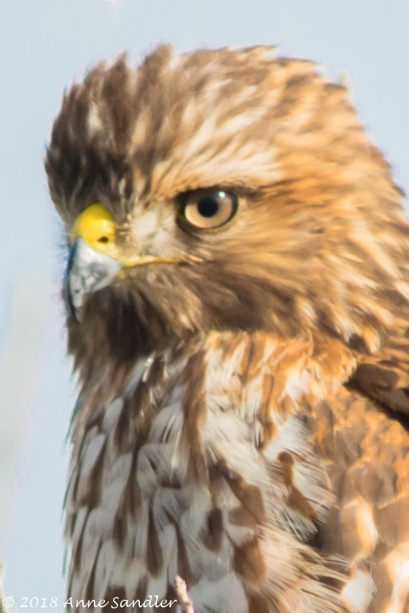 What do you think he’s saying?

I should say this visit was the second start of the new year. The actual first outing was to capture the super moon on January 1. It didn’t go well. First my fixed F/4, 300 mm was way to long to capture anything but the moon, and I didn’t bring another lens! Then the moon came up between two trees. I got the moon sharp, but the tree branches were soft.

So, we’ll begin my year at the Bok Kai Temple in Marysville and the Sikh Temple in Yuba City. We started with the Bok Kai Temple. Our docent Ric Lim gave our group of about 6 photographers an amazing tour. The Chinese history in Marysville is rich and still continues today. The Temple is small, but we managed to take photos anyway. He also took us to the former school house which is now a museum.

Gold is what brought the Chinese to this area many generations ago and loyalty keeps some of the older Chinese in the community. Carrying on the legacy is important. Parades are still celebrated, the Temple is open for worship and occasionally the community is called upon to pray that Marysville does not flood.

After lunch, three of us wandered into Yuba City and found the Sikh Temple of Yuba City. I found a worker and asked if we could go in. “Sure,” he said. He helped us cover our heads after we took off our shoes. I also asked if we could shoot inside. “Sure, no problem,” he said. We did eventually get asked to leave. I think it was because we were getting too close to the alter. I’m sorry we didn’t arrange for a tour which would have given us a better understanding of what we were experiencing.

Be prepared–there’s a lot to look at! This may not have been my first outing of the new year, but it was great!

This was a labor union building that is across the street from the Temple.

A cabinet full of herbs in the labor union building.

One man is recreating this mural out of concrete on the adjacent lot. 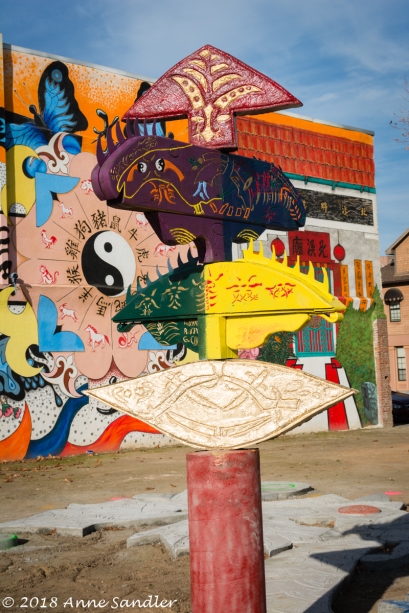 He created the pattern by dowsing. 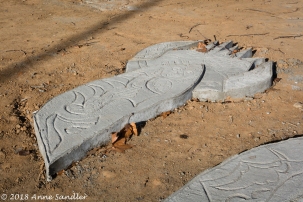 This is a foot of the dragon.

We are going into the schoolhouse.

This dragon has led many parades. The original dragon, Mulan, was retired and now resides in a closet. 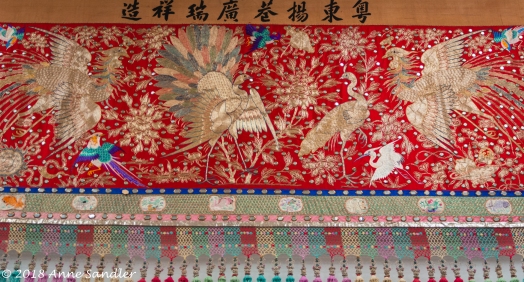 This is a sample of some of the tapestries.

These doors are inside the museum.

A closer look at one door.

This incense cone helps prayers to up to heaven.

Inside – the back alter.

Another part of the alter.

Oil lamps outside also help prayers on their way.

A gazebo near the entrance.

We’re now at the Sikh Temple. 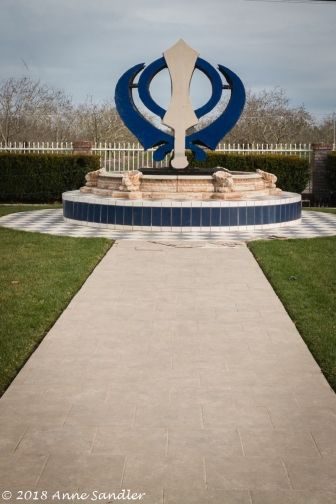 The outside is painted blue and white.

This was as close as I dared to go. I would love to know what all this means.

Do you like leftovers? I do, but not when they tell that I haven’t been posting in this blog for a while. Or, maybe it’s that I’ve been out shooting and haven’t had the time to post. I think it’s a bit of the two.

In this blog post, I’ll show you some of my last visit to Mather Lake Regional Park in Sacramento County and Sly Park Recreation Area in Pollock Pines. Both tell a story of to expect the unexpected!

At Mather I did bring my 55 – 300 lens so I could capture the wildlife. During my last trip I brought my 18 – 140 lens thinking I’d be doing more landscape, but I found beautiful wildlife that I struggled with capturing. This time the sky turned dark and I still struggled but not as much. Next time, should I bring my F4/300 on a monopod?

The outing to Sly Park was to be a kayaking outing. While others kayaked, Karen B and I were going to walk the trails around the lake. We would then get together for a lunch of homemade clam chowder (Cup Of Noodles for me.) The unexpected was that the only person to bring a kayak was the organizer. So there were three of us. In the end, Karen and I shot around the dock and didn’t walk the trails. By lunch time, more people had joined us.

Will 2018 see us taking photo trips without the unexpected happening? I don’t think so. We should always be ready to be flexible on our photo outings. Sometimes the unexpected is fun and great photo opportunities. On to 2018. I’ve got some leftovers already! 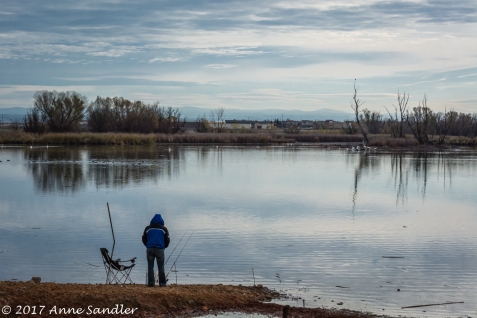 There was a pelican among the cormorants.

A closer look at the pelican. 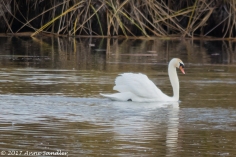 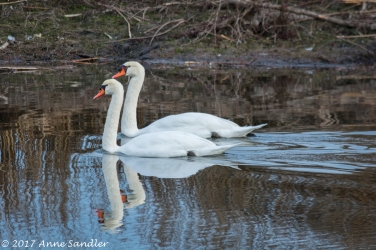 Got to get in at least one landscape.

In flight with a trophy.

Julie did come back with a shot of a bald eagle. 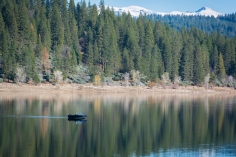