Growing up, I heard those words, “Never Forget,” but they were talking about the Holocaust where 8 million Jews were slaughtered. We are still remembering today as most of our survivors are dying.

Now in the United States, we have another reason to “Never Forget.” On September 11, 2001 we were attacked by terrorists using commercial airplanes as weapons. I remember listening to my radio as I drove to a networking meeting that morning; It was unreal. During the meeting, we were all stunned. Later, millions watched videos on TV as the Twin Towers of the World Trade Center came crashing down. Another plane would crash into the western side of the Pentagon. Then came the word about the brave souls of Flight 93, crashing their plane in a Pennyslvania field before it could hit another building.

On September 11, 2018, my photo buddies and I, went to the West Sacramento Memorial Flag Tribute. This is put up each year to pay tribute to the lives lost through the attacks and the first-responders who tried to find survivors. We went specifically to capture the scene during the golden hour, and it didn’t disappoint. The sun lighting up the flags made the memorial more significant. The tribute was set up beautifully.

I remember that day in 2001, and the days after, when the world mourned with the U.S. and patriotism rose. We came together as a nation. No, we will Never Forget.

The Tribute is set up in a vacant lot. 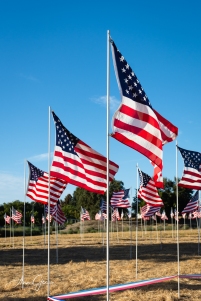 This figure is to honor the first-responders who gave their lives.

Fortunately there was wind that evening!

The sun going down behind the flag.

I liked the way the flags fluttered in the wind.

This guy played the harmonica while we were there. 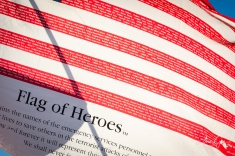 This flag listed all the first-responders who died.

This flag listed all who lost their lives in the Towers.

Another view of the first responder.

The sun is falling low in the sky.

This flag honors the passengers of Flight 93.

Another view of the field.