Wednesday was supposed to be partly cloudy and the first day of no rain in two weeks. So, I asked Richard if he wanted to take a ride down to the Delta–just to get out of the house. We were astounded to see rain drops making perfect round circles in our pool Wednesday morning. I checked the weather forecast and it said RAIN!

We went anyway. Going south, the rain lessened and by the time we got to Locke, it was just a light mist. We were amazed at how high the Sacramento River was. Everywhere we walked that wasn’t paved was soft so our shoes sank into the soaked earth. You’ll see in some of the pictures that piers were floating well above their normal levels.

We started in Locke’s Historical District, drove through Walnut Grove, went on to Rio Vista for lunch and then home. It rained on and off the entire morning. Of course I brought my camera along–just one camera and lens. But, I didn’t go out of my way to find environments to shoot. I’ve gotten so that I don’t go anywhere without my camera!

This was not primarily a photo outing. We were just two people trying to get out of the house for a short time. We got out and it did put a dent in our cabin fever. Oh, I read in the newspaper that Northern California is out of the drought, but parts of Southern California is still in severe drought. It’s progress.

Locke’s Main Street. This was my 4th time in Locke.

New was this store for sale.

This alley was the same, but glistened in the rain.

This is part of a door on a building that is holding on for dear life.

This shop is new and has a new look. 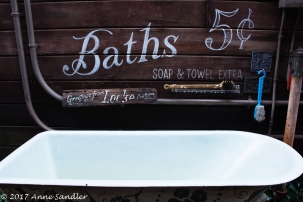 This is the most photographed in Locke. This time I just went for the sign. 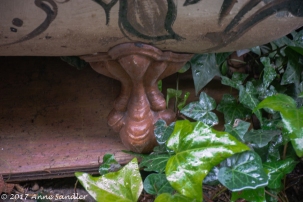 And I went for a close up of the tub’s leg.

I hadn’t seen this painted van before.

I liked the flag reflection in the window.

The pier at Walnut Grove. The river is high.

At Rio Vista, the pier is floating well above it’s normal level.

Picnic table in a flooded area.

Shot out of the car window as were were moving at 55 mph. This orchard could have been flooded in the heavy rains.

A field mostly under water.

I was really trying to capture the clouds over this soaked field.