It was just a peak at Waterton Lakes National Park, (WLNP) that is at Glacier National Park’s (GNP) most northern end. But, because it’s located in southern Alberta, Canada you need to show a passport at the border. It was a 2 1/2 hour drive, going around the east boundary of GNP since the western border was closed. Well, it was worth it.

Except for just a little fun harassment from the Canadian border guard, it was a great day trip. The park staff was very helpful and showed us two drives we could take and sight-see. We did half of one and the total of the other. We also explored the lovely village near the lake.

But before we did anything, we visited the Prince of Wales Hotel. It stood at the top of a hill. When I saw it, I knew I need to get up there to get some spectacular shots. The hotel itself was fun to shoot. Inside they welcomed everyone, hotel guest or not. And, their staff was from different countries.

Next stop was a village by the lake. I saw a doe walk up to a porch and look at the front door. I quickly picked up my camera and focused it. By the time I was ready, she was already feeding on the flowers in the hanging pot!

After lunch, we drove the route called Akamina Parkway half way because I wanted to drive the entire Red Rock Parkway. This was another mountain drive, much like those in GNP.

Red Rock Parkway showed us a different topography–less trees and more of a prairie. I was curious to go to Red Rock Canyon because of all the red rock canyons we have in the western states. It wasn’t as large but it was beautiful. Families took advantage of the water to wade and get wet.

Again, there were fires. The Park staff said one had just started in Alberta, and everyone was warned to be careful. I’m wondering if this is an unusual or typical summer.

It was a long trip back to our trailer in Columbia Falls, but a totally enjoyable day.

Mountain Goats on the road.

A young one turns around and looks back. 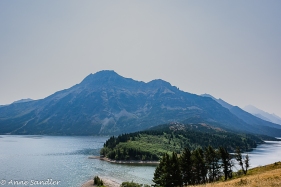 The point at which Middle and Upper Waterton Lakes. Taken from the Prince of Wales Hotel back yard.

Looking down Upper Waterton Lake. Again from the Prince of Wales Hotel.

You can see the small village to the right. 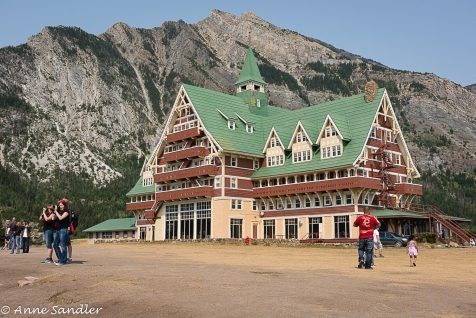 The back of the Hotel.

Inside the hotel. A chandelier. 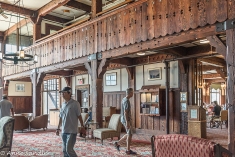 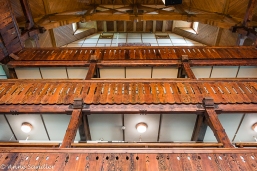 Looking up at the various levels.

The doe enjoying a nice treat. 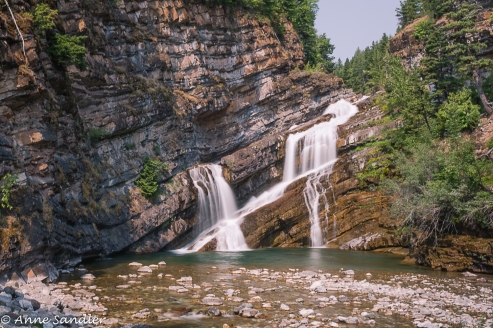 A water fall on the Akamina Parkway. 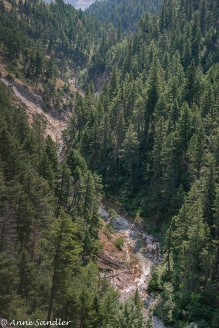 Looking down from a turn out on the Akamina Parkway.

Now on the Red Rock Parkway.

These trees were abundant in both National Parks. They sort of look like Aspens.

Taken on our way out.