When it’s triple digits, it’s even too hot to shoot in the early morning hours. And even though I had been to Old Sacramento for the Sacramento Music Festival, I suggested the California State Railroad Museum. There were three of us that morning, Jim, Marlene and me from our Camera Totin’ Tuesday group.

Jim went in without flash, but an excellent lens. Marlene went in with a great lens and flash. I went in with my 18 – 140 mm lens and flash. Jim gave me the excellent hint that he was shooting on Aperture Priority. So I tried it out. It worked well. This is where you set the aperture and the camera does the rest. Oh, I didn’t mention that the lighting was lousy: low light with different bulbs, some LEDs and some tungsten. So there were patches of yellow light and some with white light. I found my flash useful in some cases and in others not. This was a great exercise in flash use.

I’ve been to the Railroad Museum with my young grandkids many times, but never with a camera. While we could use a flash, we couldn’t bring in tripods–another obstacle to make this shoot more difficult.

My spirits perked up when I found the mirrors! One of the trains was parked on a floor of mirrors, in front of a wall of mirrors, with mirrors overhead. This is either a photographers dream or nightmare! I had such fun. I’ll show you some of reflections I shot.

All in all, it was a great indoor outing. Followed by an indoor lunch. It’s triple digits again today. It’s going to be a hot summer!

The main room of the museum. Just a few cars are open for people to walk through.

I looked inside a passenger car. Look at how brightly it was painted. 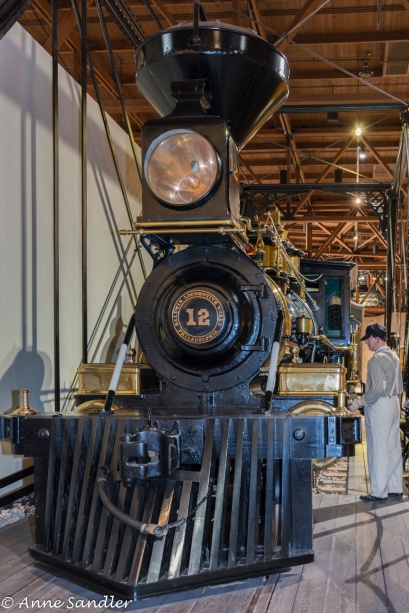 They used mannequins throughout the museum.

This is a longer view of the same train.

Looking inside another passenger car.

The cab of this steam train is open for people to go into. The last time my grandson visited, he sat in the engineer’s seat. It’s fun for kids. 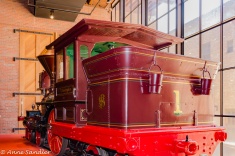 I’m not sure what this train was used for, but it had a lot of natural light.–maybe too much? 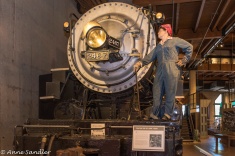 This exhibit features Rosie The Riveter. During WWII many women took the place of men on assembly lines in factories.

Here come the mirrors. This one is a floor reflection. 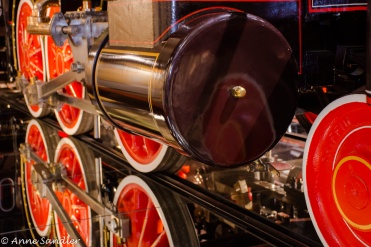 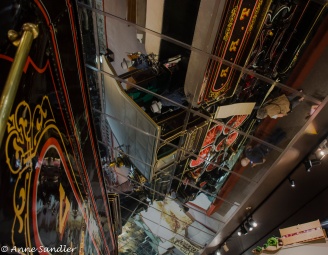 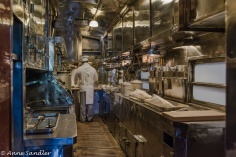 Look at the kitchen in this dining car!

Look at the table set up! They traveled in style. 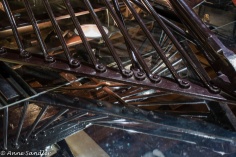 I couldn’t resist one more mirror. The cattle guard.