Both Alyse and I decided in a recent phone conversation that we were going around in circles–not literally but in the sense of getting nowhere with our lives. Returned from our 2-week road trip, neither of us felt that we were getting much done or advancing toward a goal.

I had wanted to take a course from Leanne Cole, a friend and fine-art photographer in Australia,  but have yet to start it. I just don’t have the time. I’m still moving boxes around, unpacking the ones I can, shopping for new things for the house and beginning to get into a normal routine, including photography. Maybe, I’m wanting too much too soon. I want to have my house done, want to begin to meet people in my new community and want to advance in my photography ability–ALL AT ONCE!

Fortunately, I’m prioritizing photo outings with my regular Tuesday group. We recently visited the Anheuser-Busch plant in Fairfield to photograph the famous Clydesdale horses. We began with a plant tour (I’ll show the images in this post.) and then watched the hitching of the horses to the cart and the small parade. This was all done in their parking lot.

So, here are some pictures from the plant tour that lasted about 1 hour. I so enjoyed the outing, and had the feeling that I was accomplishing something. In the next post you’ll meet the horses and April, the dalmatian.

Oh, on a side note, when I met one of my new neighbors, I kept talking about going out to shoot this and that. I saw a puzzled look on her face, and realized she thought I was talking about guns! “I shoot with a camera,” I said!

This is a reflection of the truck and gates in a plant window.

Inside the plant, flags are displayed. 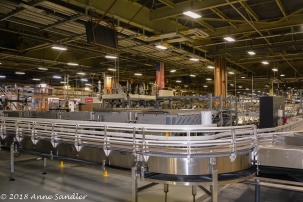 On the main floor. 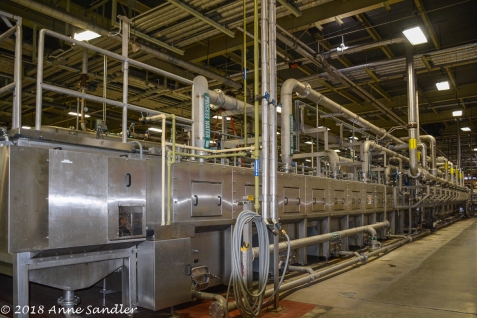 The plant is immaculate. 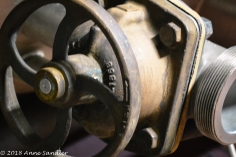 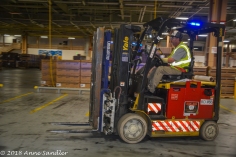 We’re in the packaging area.

I think cases come down the circular conveyor belt.

Always a photographer, I look for an angle.

I really don’t know what this is, but it was hanging there as we excited. He’s cute.